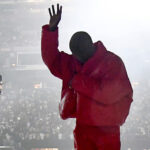 Kanye West has launched another livestream on Apple Music in the lead-up to his Donda livestream event tonight at the Mercedes-Benz Stadium in Atlanta, Georgia. He started playing the album around 10:27 p.m. Eastern as he stood in the middle of a minimal set featuring a bed. You can find it on Apple Music.

The album played tonight featured many previously shared songs with some updates and a different track order than last time. Young Thug and Kid Cudi made an appearance on a previously shared song that fans call “Remote.” It also included a new songs, including one with Lil Yachty and Lil Durk. Unlike the previous Atlanta event, Kanye was eventually circled in the central stadium stage area by a crowd of bodies.

The stream began with a continuous shot of West’s living quarters within the arena, where West and others were seen “finishing” the album. A clock hung on the far wall that counted down to 12:30 a.m. on Friday, August 6. The stream later showed the stadium floor.

Donda was originally set to be released on July 23, following the first livestream event on July 22. The album did not materialize, and West later shared via a representative that the album release date had been moved to August 6. It was also reported that West had taken up temporary residency at the Atlanta venue, where he was finishing the album. A pre-order has gone live on the iTunes Store with a black box instead of artwork; it lists 24 untitled songs.