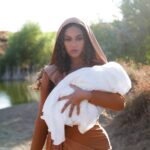 Even though many people have watched ‘Black is King’, that doesn’t mean that they don’t want to watch it again or rewatch the music videos from the soundtrack.

Queen B has released the official music video for Otherside. You wan watch it below: